America Is About to Test How Long ‘Normal’ Can Hold

Whenever it arrives, the next surge could put the country’s tolerance for disease and death in full relief. 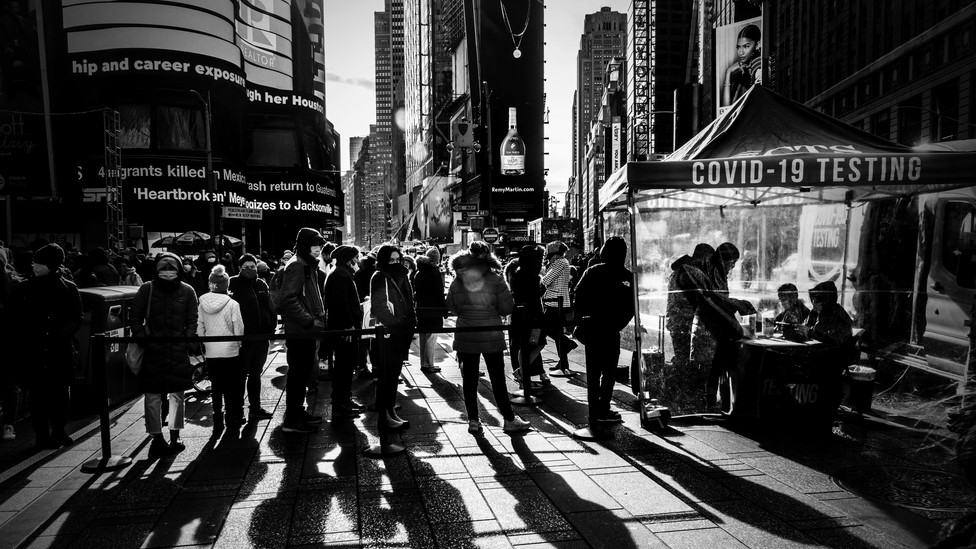 At this very moment, the United States, as a whole, remains in its legit pandemic lull. Coronavirus case counts and hospitalizations are lower than they’ve been since last summer. There’s now a nice, chonky gap between us and January’s Omicron peak.

And yet. Outbreaks have erupted across Asia. Massive swaths of Europe, including the United Kingdom—America’s best pandemic bellwether for much of 2021—are firmly in the grip of a more transmissible Omicron subvariant called BA.2 that’s been simmering stateside for months. Already, scattered spots throughout the U.S. look a shade foreboding. Several states’ wastewater-surveillance sites are witnessing a rise in viral particles, which, in previous waves, has preceded increases in documented infections by several days. Many states’ case rates have now hit a plateau, and a handful are even beginning a slow march back up. The other COVID shoe seems poised to drop in the U.S. at some point, perhaps quite soon. When it does, it won’t be pretty. “With policies, with supply, with vaccination rates, we are not prepared,” says Julia Raifman, a COVID-policy expert at Boston University.

After two years of chaos, Americans do have some factors working in our favor. COVID vaccines, when delivered in multiple doses, work well against all known Omicron subvariants. The recent Omicron infections that shredded the U.S., and the smidges of immunity they left behind, might slow BA.2’s roll as well. The weather is warming, pushing more people outside. Perhaps spring will indeed bring a surge. But most of the experts I’ve spoken with think that the U.S. is unlikely to see a BA.2 peak that mirrors the magnitude of Omicron-classic’s (BA.1’s) record-breaking winter crush.

Then again, better than Omicron’s January zenith isn’t a high bar to clear. Even in a best-ish-case scenario, in which the country’s average curve remains somewhat subdued, Sam Scarpino, the managing director of pathogen surveillance at the Rockefeller Foundation, told me, we’re likely due for a patchwork on more granular scales, with a mix of plateaus, ups, and downs at the state and county level. If that variability sounds like a relief, it shouldn’t: COVID can be a local crisis without being a national one, and can batter the vulnerable all the same.

However it manifests, the next American surge will be a stress test of the nation’s new COVID strategy, a plan that focuses on mitigating severe disease and death, and almost nothing else. Places that follow the CDC’s lead will let infections climb, and climb, and climb, until they’ve seeded a rash of hospitalizations, with more to follow. Only then will our new guidelines say that’s enough. The Biden administration’s sights have clearly been set on minimizing disruptions to American life. The cost? By the time the government says that it’s time to act, any wave we experience will be well under way. Whatever happens next, we’re living the reality the CDC’s guidance bargained for. The country’s new COVID rules have asked us to sit tight, wait, and watch. We may soon see the country’s true tolerance for disease and death on full display.

When the next glut of infections might make landfall in the U.S., and how big it might balloon, still isn’t clear. Danger brewing abroad doesn’t guarantee an American encore, as my colleague Rachel Gutman reported last week. BA.2 has been here since at least December, and though it’s now starting to overtake BA.1, especially in the northeastern United States, it hasn’t yet gained the momentum that’s been carrying it through Europe. Maybe that’s a sign that we are a bit buffered—and this afternoon, at a press briefing, CDC Director Rochelle Walensky emphasized that the administration was watching for signs of hospital stress. But plenty of warning signs are already flashing. This subvariant is fleet-footed, even more so than BA.1; it will spill into the gaps its predecessor left. Our COVID defenses are also flimsier than they’ve been in a long time. U.S. vaccination rates are still way too low, especially among the elderly, and kids under 5 remain ineligible for any shots at all. (Moderna is now making a bid for emergency use authorization for its under-6 shot, and Pfizer is expected to follow soon with data from its expanded under-5 trial, using a triple-dose series.) Much of America has freshly eschewed masking and flocked back into indoor public venues, at the same time that federal pandemic funds necessary for vaccines, treatments, and tests have dried up.

On the CDC’s risk map, the state of New York, for instance, where cases have been gently moseying upward for about a week, remains awash in a uniform shade of green—denoting “low” COVID-19 community levels. Counties would need to clear 200 new cases per 100,000 people over a seven-day period to warrant a flip to the yellow tones of “medium.” At that point, the CDC would suggest that people who rub elbows with folks at high risk for severe disease might want to consider self-testing or masking indoors.

There are hidden-but-tangible taxes to that approach. Take the CDC’s current stance on masks: Only when counties hit “high” COVID-19 community levels—when hospitals are starting to fill up with severe cases—does the CDC say that masks should go back on for everyone. “That’s a lot like waiting until the outer bands of the hurricane are hitting the city before you trigger an evacuation order,” Scarpino said. And even then, not everyone will listen to the agency's suggestions.

Dillydallying inevitably racks up the kinds of costs we can’t recoup. Two health-policy researchers, Joshua Salomon of Stanford and Alyssa Bilinski of Brown, recently ran an analysis of the CDC’s new guidance and found that waiting for the CDC’s “high” level to turn on additional protections could lock the country into at least 1,000 Americans dying each day from COVID. “We’ve embarked on this experiment to see how far we can push two extremes: how low we can push our level of response, and how high we can push our tolerance for avoidable illness and death,” Salomon told me. The death toll could be lower if COVID’s fatality rate decreased—if, say, vaccination rates suddenly rocketed up, or if every infected person could instantly access tests and treatments. But Salomon said those are very unsafe bets to make. As it stands, “the CDC policy is to not take action to reduce spread until there is a high level of death,” Raifman told me. And that’s to say nothing about the long-COVID cases and other serious impacts that would follow as well.

The agency’s plan is simply too slow and too reactive, antithetical to how public health operates best—when it leans on proactive measures meant to prevent an undesirable future, says Maia Majumder, a computational epidemiologist at Harvard Medical School. The solution is acting earlier, though exactly how much earlier is unclear. Single infections have a way of branching into multiple ones, imperiling the vulnerable, including unvaccinated people; workers who are highly exposed to the virus; those who lack easy access to medical care; people marginalized by race or socioeconomic status; and the immunocompromised, who do not respond as well to vaccines. These communities have already borne the pandemic’s brunt; any future wave would disproportionately burden them again.

I asked the CDC for its take on what’s up ahead. “We’re in a stronger place today as a nation with more tools to protect ourselves and our communities from COVID-19,” Jasmine Reed, an agency spokesperson, wrote in an email. “CDC’s COVID Community Levels and the corresponding prevention measures allow us to adapt and respond to new variants or a surge in cases.” Somehow that seems tough to square with the dwindling of funds to support further vaccinations, testing, and treatment—especially for the communities that most need to access them. The CDC’s new guidance is contingent on a capacity to react, and the assumption that supplies are free-flowing. They are not; they never have been; they will not be, unless more money comes through. Which means that we’re slated to start this next surge not just with porous shields but without the ability to patch the gaps. At the press briefing, White House officials underlined Congress’s failure to refresh pandemic funds, outlining again the consequences of the shortages that will result.

Without resources to respond quickly to a more dangerous level of disease, our tolerance for infections should be quite low. “To prevent unequal outcomes, you have to prevent people from getting infected in the first place,” says Lakshmi Ganapathi, a pediatric infectious-disease specialist at Boston Children’s Hospital, who has two unvaccinated sons under the age of 5. One option would simply be to return to masking and other measures much earlier; Jeremy Faust, an emergency physician at Brigham and Women’s Hospital in Boston, recently proposed a trigger of 50 cases per 100,000 people per week as a way to keep the risk of infection for immunocompromised people lower than 1 percent. (And that’s only if we assume effective monoclonal-antibody treatments are readily available, which they are not.) Most counties in the U.S., for the moment, remain below that benchmark. Salomon and others also propose the idea of more closely tracking how steeply cases are rising over the course of several days—a potentially good way to confirm that transmission is truly starting to deviate from the norm.

But even our metrics are, at this point, kind of on the fritz. So much testing is now done at home that official case numbers are becoming “nearly impossible to interpret,” Scarpino told me. Wastewater, a test-agnostic approach championed by the CDC as an “early warning of COVID-19’s spread in communities,” could offer an alternative. And yet the agency doesn’t include this metric in its community-level guidance, in part because wastewater-surveillance sites remain sparse and unevenly distributed. Wastewater data can also be tricky to interpret when the total number of viral particles is very low. “There’s just more noise, and it’s more unstable,” says Megan Diamond, of the Rockefeller Foundation.

So the country is left playing chicken with case counts. That’s what worries experts such as Scarpino the most—not the danger posed by some scary new variant but the danger that we, in neglecting the holes in our pandemic-preparedness tool kit, pose to ourselves. In a sense, whether a bad BA.2 surge is nigh “doesn’t really matter,” he told me, “in terms of thinking about the things we should be doing now.” The to-do list isn’t short, and it’ll require the federal funds that remain in political limbo. The unvaccinated need first shots. The unboosted need boosters. Masks, tests, and treatments should be accessible to everyone, with the most vulnerable at the front of the line. Stocks must be filled while things are a bit calmer, Raifman told me, so that we’re not scrambling when danger’s already upon us. Then, when surges do come our way, our focus can be on collectively cocooning the vulnerable—masking when it’s clear that cases are going up, turning on remote-work options, ensuring that high-risk people have opportunities to safely shop for food, travel, and access the tools they need.

Again, we don’t know when measures like these will need to flicker on. It could be next week. It might not be until fall or winter, perhaps when an even scarier variant might come to call. The ambiguity is actually the point: The best public-health infrastructure is flexible and comprehensive enough to protect both in peacetime and amid the throes of war. It is the system we lack now, and the one we need to build. It is the hardest path to take, but it is also, Ganapathi told me, “the path of least regret.”