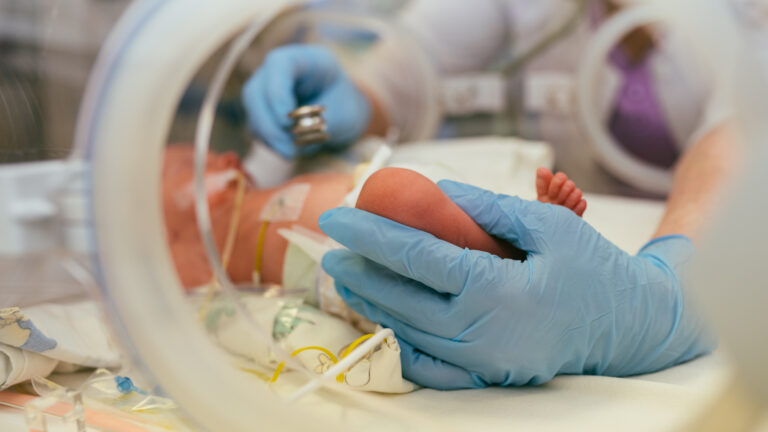 When a baby arrived at Children’s National Hospital with a critically underdeveloped heart, it was clear to her care team that she needed surgery. But they had a dilemma: At less than 6 pounds, she wasn’t strong enough to undergo surgery but probably wouldn’t survive without it.

The solution was a stent, a tube the width of a toothpick. It would be inserted through an artery in her leg, maneuvered into a key blood vessel near her heart, and then expanded to keep blood flowing through vessel until she was big enough to undergo the open-heart surgery she needed.

The work of the surgeon and cardiac interventionalist was exceptionally complex. But so was another part of the process: securing the approval to use the device.

The smallest stent available to use in the U.S. is one made for an adult’s smallest vein. But it isn’t nearly flexible enough for a tiny baby. The surgeons had to obtain a smaller, more flexible, stent from Europe and, before they could insert it, had to secure a compassionate use exception from the FDA because it wasn’t approved for use in the U.S. All of this meant precious time lost when a life was on the line.

As both a former surgeon and the current president and chief executive officer of Children’s National Hospital, I can attest that this is not an isolated incident. In the U.S., the development and commercialization of medical devices for children lags significantly behind that of adults. Over the past decade, only 24% of lifesaving medical devices approved by the FDA have an indication for pediatric use, and the majority of those are for children 12 years and older.

There are several reasons for this disparity. First, the number of children requiring medical devices is considerably smaller than the number of adults, which is a deterrent for device makers. Second, it’s more difficult to design devices for children because they tend to be highly active — and they grow. Another barrier is the clinical trial process: Not all pediatric hospitals have the research and oversight infrastructure to accommodate a trial, so the number of sites available for any trial is limited.

The FDA has done exceptional work to move forward the development of medical devices for children, including the creation of the of the Pediatric Device Consortium, whose mission is to bring pediatric devices to market to address unmet clinical needs. The latest approved federal budget will also help, as it included an additional $1 million for the FDA to improve infrastructure for conducting trials of pediatric devices. And as the trial infrastructure expands, the FDA has issued guidance documents on the applicability of real-world evidence for pediatric devices.

These are critical stepping stones, but more public-private partnerships can help accelerate progress, such as the System of Hospitals for Innovation in Pediatrics – Medical Devices (SHIP-MD) strategic framework. Sponsored by the FDA’s Center for Devices and Radiological Health, it aims to increase innovation in pediatric medical devices by engaging representatives of pediatric health systems, the medical device industry, academic institutions, organizations like the American Academy of Pediatrics, and others.

The SHIP-MD initiative aims to close the gap in the development of medical devices for children by removing the risk for developers and manufacturers and by accelerating the process to get safe devices to the market.

I and others are looking to this work for reforms in three key areas of pediatric device development:

To “walk the walk,” Children’s National Hospital is elevating its commitment to innovation in pediatric medical devices with a phased opening of the nation’s first research and innovation campus dedicated to pediatrics. The campus will be a place for people working on pediatric devices, drugs, therapies, and technologies to come together to accelerate discoveries that will benefit children everywhere. Our partners include JLABS, Johnson & Johnson Innovation’s life science incubator, and Virginia Tech.

America’s children deserve the same commitment to innovation in the development of life-changing, and often lifesaving, new drugs and devices that is given to adults. I am hopeful that public-private partnerships and a collaborative effort can bring beneficial new technologies and treatments to children faster than ever before.